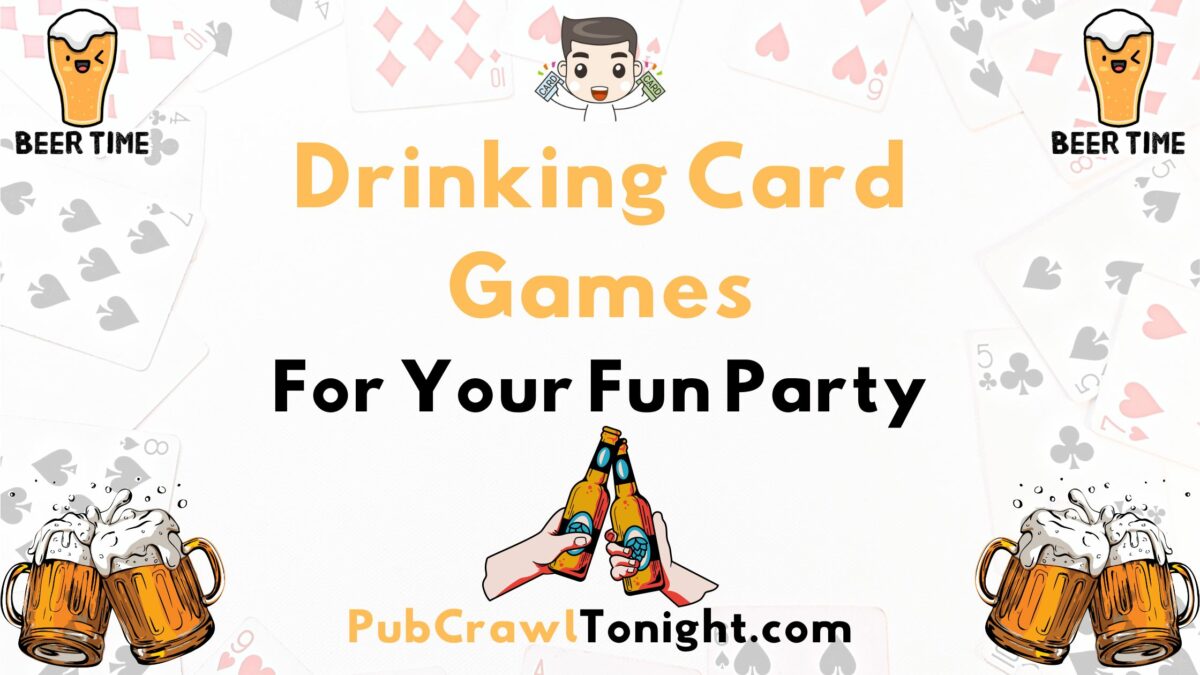 Card games are often a lot of fun. They give our weekend get-togethers and vacations a fresh spin. In addition to making the environment more enjoyable, they guarantee that you use your brain while playing. The majority of drinking card games will force you to find ways of improving your critical thinking skills and teach you how to make strategic judgments, just as the games of chess, monopoly, and a few other games do.

The top drinking card games are listed here for you to try at your upcoming gathering.

Several of our finest suggested Drinking card games involve little to no effort and most often make use of household items that are already on hand. Additionally, becoming proficient in the majority of these drinking card games will make you the life of the party.

Kings Cup is unquestionably one of the finest and most popular drinking card games, and it is more enjoyable when played with more people, especially your buddies.

A deck of cards, a few smaller cups, a larger cup, and your preferred alcoholic beverage are all you need to play.

The fundamental King’s Cup card rules state that each participant must select a card and move clockwise in turn. Each card corresponds to an action, and we’ll explain what each one signifies in the sections below so you can play with confidence.

The player who picks the Ace card must instantly start drinking, and so must the players on their left.

A player who rolls a Two will be assigned a different drinker.

Three indicates that the caller must consume alcohol.

Four indicates that all the female players must consume alcohol.

The person who draws a card with Five hands must dance. The following participant must then perform the same dance while including a move that is uniquely theirs.

All the male players in the game must consume booze when a player chooses card number Six.

When the number Seven commonly known as “heaven” or “hell,” is drawn, all participants are required to raise their arms. The individual who raises their arms last loses and is forced to drink. Alternatively, all players must point downward to the ground if they choose to play under the Hell rulebook.

The person who pulls this card is required to select a drinking companion. The other player must drink every time the other party does, just as the name implies.

When a player gets a nine, they must select one word. The next person in line must utter a word that rhymes with it. The chain continues until a player pauses too long or selects a term that doesn’t rhyme, at which point The player who breaks the rhyme is the loser and must drink.

The person who draws the card is required to select a category. Meals, entertainment, sports, games, and other similar subjects are all possible themes. The participants must circle either clockwise or counterclockwise and speak something relating to that category.

“Never Have I Ever” will be played by all players once someone picks up a Jack.

A question must be asked to the player sitting next to them if this card is selected.

The game continues until the final participant is attained or a participant slips up and answers the question. Each player must offer their own question to the individual sitting next to them without responding to the original question.

Last but not least, whoever draws a king gets to decide on a game rule. You can make any rule you wish for this one. Naturally, whoever violates your rule will need to consume alcohol.

Additionally, keep in mind that if a player breaks the chain of cards, they must consume all the alcohol in the cup in the middle. The game is over when all of the cards in the deck have been expended.

Blow out the cards

Playing Blow the Cards with friends is a relaxing, moderate activity.

Players start the game by putting an uncorked bottle of beer on the table. On top of the bottle, a deck of cards is placed. Place the alcoholic drinks that you and the other partygoers will be using next to this bottle.

At the conclusion of the deck of cards, the player who has consumed the fewest beverages wins.

Up and down the river

For large gatherings, this drinking card game is fantastic. To play “Up and Down the River,” you require two decks of cards.

The dealer is chosen by the other players. Every round, the dealer deals with and oversees the game. The playing cards from both decks must first be shuffled before being placed in the center of the table.

The dealer then deals himself and each player four cards because they both play. Each player sets their cards face-up on the table after taking a glance at their hands. He also removes a card from the middle deck and lays it face up alongside the other cards in the deck. A player must drink if they have the same card in front of them or a card with the same value.

The suit of the cards doesn’t matter in this drinking game; only the card with the same value determines whether the participants must consume alcohol. If there are two cards with the same value placed in front of the players, certain fortunate or unfortunate players could have to drink twice.

The Give and Take drinking card game mimics a game of truth or dare by assigning turns at random and giving players the choice of participating in truth or dare or simply drinking their drinks.

In order to distinguish between the “truth” and the “dare” row, arrange two parallel rows of 12 cards on the table. Distribute one to each four-card player, starting with the one on the left of the dealer. A card from the truth or dare row is turned over by each player in turn.

A player is required to drink if they refuse to speak the truth or don’t fulfill a dare. The amount of time depends on where the flipped card is. Once every card in each row has been exposed, the game is over.

If you want quick entertainment, the best drinking card game is The Lowest Card. Initially, confirm that you have enough cards. Two or more decks are required for a large group. Put them on the table and combine them.

Then, each player takes a card, looks it over, and holds it over their forehead with the face of the card showing out so that the other players can see it. If your card is the lowest among all the other foreheads, you must take a shot. Play in this manner until you are out of cards. For those who are starting to feel cross-faded, the Lowest Card drinking game is ideal.

Bullshit is a quick-paced drinking game that can be played at any type of gathering and requires no prior planning.

Once every participant has the same number of cards in their hands, the game may begin. Distribute cards evenly among the players. The action starts with the holder of the ace of the spades. Each player deals one or more face-down cards to the table and declares what they are discarding one at a time.

“One ace,” the first player says. The next card in the ranking sequence must be discarded by the succeeding player. In this case, the following card is a two. Every individual player now has one turn to discard all of their twos, threes, etc.

If a player does not have the following cards in order, they must put down a different card while pretending it is the correct one, hoping no one shouts bullshit.

One of the nicest things about learning how to play this drinking card game is that you may make any rules you want, and no one will bother to think since you’ll all be too drunk to notice. If drinking is not your thing, there is no issue.

The Spoons card game begins with players assuming positions anywhere around a table. For each player in the game, a four-of-a-kind set should be left in the deck. After that, set out enough spoons in the table’s center for everyone but one player. After that, deal four cards from the deck to each participant.

In turn, each player will select a card from the deck. There will be a “caller” who screams “pass” throughout the opening and subsequent rounds. Players are instructed to pass a card to their left by the caller (unless “right” is specifically directed).

The aim is to gather four of a kind. When this occurs, all the other participants rush to collect spoons from the table as that person snatches one. Anyone who doesn’t receive one must consume alcohol. If two people reach for the same spoon, the one with the larger portion is the owner.

To do away with your cards is the fundamental goal of the President card game. The last player who holds any cards is not who you desire to be if you don’t want to end up being drunk. In this, a president is chosen, who first displays a pair of cards that match. By exposing a higher-fitting pair or skipping their turn, players alternate between attempting to outsmart the president’s cards.

Be sure to take the cards off the table once each player has completed a turn. The following round’s president is determined by who played the final pair of cards in the preceding round. The president receives the best card from the scum, who was the last player standing in the previous round.

Additionally, they need to order beverages for the table. It’s a well-liked drinking card game at university gatherings.

Beeramid begins with a pyramid shape, exactly as its name suggests. Five cards are placed at the base of a pyramid-shaped arrangement of 15 cards, with one card at the top.

Four cards are handed to each participant. The topmost card of the pyramid is flipped by the dealer to begin the round. Any player may order another player to drink if they have a card of the same number in their hand, or if they pretend to have such a card in their hand.

The location of the turned card in the pyramid determines how long the drinker will continue to guzzle (the lowest amount of drinking time is required for a card in the top row, and the most for a card in the bottom row). The amount of drinking time is doubled by the number of corresponding cards the person allocating the drink has in their hand if they have more than one card that matches the flipped card (or say they have one).

A player who has been given the task of drinking may either begin to gulp or declare that the other player is bluffing. The defendant must next either establish their innocence or admit to lying. If they weren’t lying, the accuser must consume twice as much alcohol as recommended, and the defendant is free to redraw after returning any exposed cards to the deck.

If the defendant is found to have been dishonest, they are required to keep their cards concealed and to consume twice as much alcohol. When all of the cards in the pyramid have been turned over, the game is over.