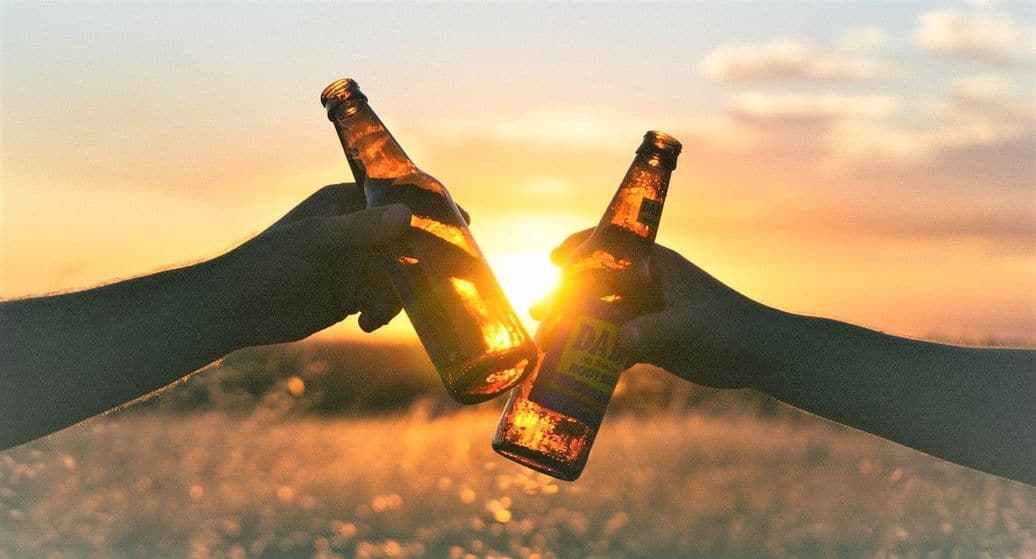 Sometimes, it’s just you and one other friend hanging out, passing the time with a few drinks. Or, maybe it’s you and your partner staying in for a cozy night together. If you’re into drinking, a laid-back night in can be a fun way to pass the time and make good memories. Make it more fun with one of our top 15 best drinking games for 2 people.

PubCrawlTonight participates in various affiliate programs, meaning that product links clicked from our site may result in us receiving commissions for purchased products.

Many of the games on this list are simply re-imaginings of existing games, and some are a bit more creative. Take your pick!

The Best Drinking Games For 2

Of all the hundreds of drinking games that have been invented, not all of them apply to just two players. If you’re looking to play some 2-player drinking games, here are the best ones.

1. These Cards Will Get You Drunk (on Amazon)

‘These Cards Will Get You Drunk’ is essentially a highly revealing and fun party game that will, you guessed it, probably get you drunk. Pick a card, do what it says to do. The creativity of the cards is great and will have you both laughing in no time.

Though this game is better played with a larger group, it can definitely work as a 2 player game. Some of the cards might need to be skipped and saved for another time. Just be ready to get a little weird with each other ;).

This game was a big success, so they have even made a sequel – These Cards Will Get You Drunk Too.

If you are playing drinking games with a new friend or someone you are getting to know, this may be an interesting game to play. It could also be a lot of fun to play with your partner. The point is, it can be very revealing. It is a slower-paced game, and maybe that is what you want! Perfect for a longer night in than an aggressive pregame.

The rules of Two Truths and A Lie:

Simple, revealing, horrifying, all the markings for a quality night in. A great ice-breaker game, and can be modified to play with more than 2 people.

Okay, admittedly this drinking game assumes that you own one or more of the Harry Potter movies. If you don’t care about the magical Wizarding World, feel free to skip ahead to the next one. But if you do like Harry Potter…let’s be friends?

A huge percentage of the world likes the Harry Potter series, and many love it. So what better way to celebrate the hit 7-part children’s book series than to make a drinking game about it.

Get your butterbeers ready and press play on your favorite HP movie and follow the rules:

We can all probably agree that actual drunken warfare would not be a good time for anyone.

However, adding alcohol to an innocent card game makes Drunk War fantastic fun. One of the easiest card games to learn, and games can last a while if you’re playing with the standard rules. All you need is a normal deck of cards.

Here are the rules of War:

War is just a fun, simple card game. It’s a great option if you’re down at the beach with a friend, or just staying in and having a low-key night.

Let’s keep this one simple.

Why these words? Well, they are the words he uses most in his songs. This study by Towards Data Science shows a word cloud for the most popular words Ed Sheeran uses in his songwriting. Pretty cool if you geek out about data.

Easy and effective. Before you know it you’ll be standing on your kitchen table holding a spatula singing Ed’s hits to your friend. Great times for all involved.

Singing Into It GIF from Singing GIFs

Another spin on a classic Hasbro board game. You can either play with an existing Battleship board, or you can just create your own.

Making the board requires a bit of craftiness and attention. That’s why it’s a good idea to set this up before you start drinking.

Making the Battle Shots board

If you don’t know how to play Battleship, this may be a bit excessive to learn for a quick drinking game for 2. However, it is one of the more fun and strategic games on this list.

This is a classic party game that can easily be adapted for two players having a few drinks. This one will get you and your opponent to open up and potentially reveal some interesting stories about each other.

Even better is that this particular card version on Amazon comes in a few different games. Girls edition, family edition, classic and parents. Get the one that suits your needs best and get ready to learn some new things about your buddies.

Want to see our top 5 favorites in a quick video? Check out our video on YouTube:

Want to play a less hands-on game? Check out the very cool Doubles app. This is a very well thought out drinking game for two people.

Doubles focuses on asking interesting questions. There are a variety of categories, from Never Have I Ever to Sexy Couples. Ooo La La.

The app is free to download, but some of the more interesting categories are $0.99 to access. Probably worth it if you want a really well designed drinking game for two!

Probably the most widely played drinking game in the world, beer pong is still fun with just two people at home.

If somehow you’ve never heard of it, here is how beer pong works:

The game is usually played with teams of 2 people at parties, where the winning team stays on. But, if you’re looking to play at home, why not get creative. We recommend making these modifications to play beer pong for two:

How to make alternate ping pong balls for beer pong

If you don’t have any ping pong balls, but still want to play beer pong, what can you use? In short, use tissues and aluminum foil. Ball up the tissues into a 1-inch ball, and encase it with 2-4 layers of aluminum foil, keeping the ball as light as possible. This will help keep the ball’s buoyancy and prevent knocking over the cups on impact.

If you don’t know the rules of flip cup, you probably haven’t been to college yet (and that’s okay).

What you need are two things:

The purpose of flip cup is for everyone to get buzzed. So that makes this one a great pregame drinking game for two. Great to start off the night before a bar crawl or a night out in the city.

11. Would You Rather (Online game)

Would you rather games are so simple, and yet bring a smile to your face every time. Whether it’s that awkward question or a moral dilemma, you’ll probably have a touch time with some.

The website Either.io allows you to pick one of two options. Here’s how to make it a drinking game:

This game is mostly based on chance, but can involve some strategy if you know something about dice odds.

How to play Higher or Lower:

It can get interesting, especially if you’re bold and guess low or high numbers. In the end, it’s just a fun way to start up your night.

This one is simple.

Put one of your favorite shows on the TV.

Tape a paper mustache somewhere on the TV screen.

If someone’s face aligns with the mustache, you both take a sip of your drink.

You can also try taping a top-hat to the screen for added comedic effect.

This game is simple but always hilarious and entertaining. Plus, you get to watch one of your favorite shows or YouTube channels.

The Wager Game is basically a coin toss, with a twist.

How to play the Wager Game

This game can become surprisingly aggressive, and can lead to some interesting situations. High and low wagers determining how tipsy you’ll get.

But after all, your odds are 50/50 so it should even out…unless your high-wager payback plan doesn’t work out.

Another twist on a classic game, this time Jenga. The Power Hour Tower is essentially a set of Jenga blocks, each with a word or instructions written on it. Each time you pull a block from the tower, you have to complete the task, usually involving alcohol.

This one is a lot of fun, and is custom curated for a party setting, but plays perfectly well with just two players.

We hope you found the perfect drinking game for two players in our list. For more fun drinking games and ideas, look around Pub Crawl Tonight. As always, have a great night.

1 thought on “Drinking Games For 2 People”