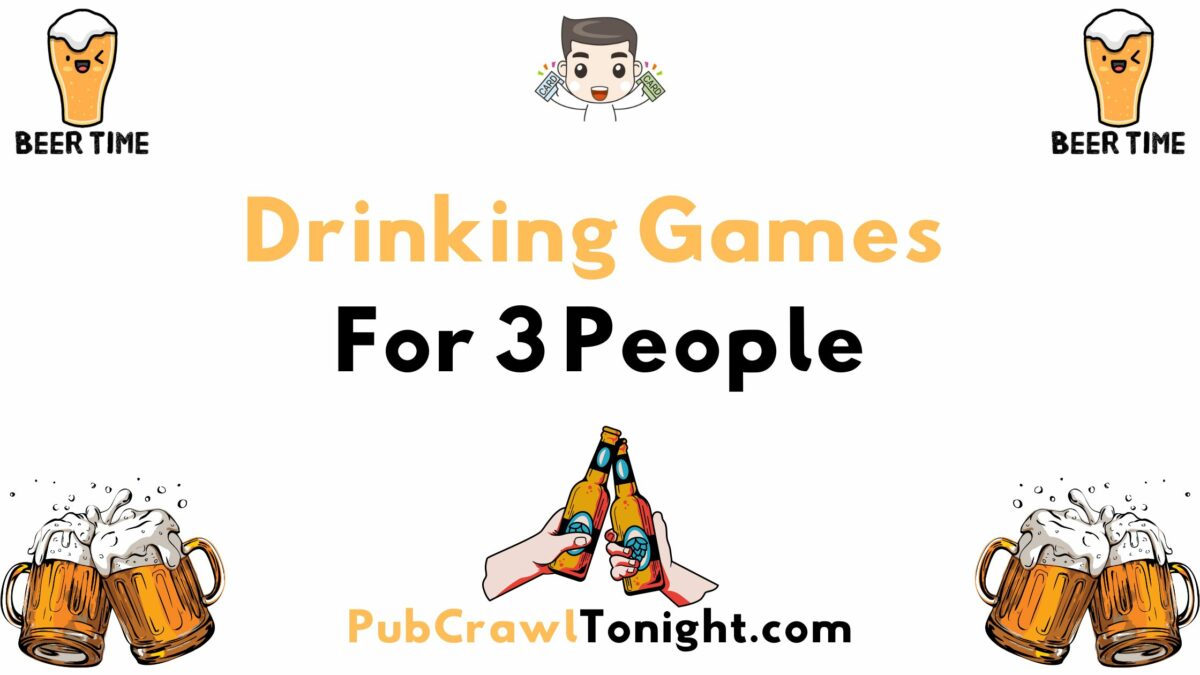 After a week of working hard, we all want to spend the weekend hanging out with those we love and doing fun activities. If you love drinking, a drinking game can be a fun way to spend time with your family or friends. In case there are only three of you, you’re in luck because, in this article, you will learn about games that are suitable for three people.

You have already met most of the requirements to play these games (people and alcohol). In some cases, you might need cards or dice. Please read on and pick your favorite game.

You may know King’s cup by a different name. For instance, some people know it as the Ring of Fire, Circle of Death, or Waterfall. The rules and level of fun are the same.

The game is suitable for three or more people. You need a deck of cards, a beer cup, alcohol, and players interested in playing the game.

The cup is placed in a central location with all the players around it. The deck of cards is then evenly spread out, with the front side facing down. Each card’s side must touch another card’s side to create an endless chain of cards.

All the players must decide on the player to begin playing the game. The first player should pick a card and show everyone what it is. Each type of card they pick up has a different action attached to it.

Below are the actions that each card number represents. These actions may vary from game to game but are always the same on different cards.

The descriptions of tasks players must carry out are partially exhausted. The actions to be carried out can be more fun and complex than described here. This game can also have different rules for each card.

The game continues until all the cards are picked.

Two truths and a lie.. is fairly simple but can lead to great fun levels. Players get to share stories behind their truths and lies, which can create great conversations that last the whole night between the players.

The rules of this game are easy. Each player must say three things about themselves. However, only two of those things can be true, and one must be a lie. The other players should then take turns to guess which one is a lie.

As a player, you should try hard to ensure that your statements are not too obvious or easy to crack. Some players who are aware you might play the game can plant seeds in conversations that trick you into making statements that make it easy for them to crack your lies, so watch out for that!

Truth or dare is one of the most popular drinking games. It has been around for ages, and for a good reason. One player poses the question ‘Truth or dare’ to another. Should the recipient of the question choose truth, they must answer a question from the current player as truthfully as possible. If they choose to dare, they are dared to take specific actions.

It is a good idea to set some ground rules for this game because it can get wild quickly. Some truths or dares might cause irreparable damage to relationships or people. This is why there should be regulations on health, relationships, employment, and other important factors of a player’s life.

A player should take a shot if they fail to do a dare or tell the truth after choosing that option. The fewer people there are in a game, the more likely they are to get drunker faster.

4. Never Have I Ever

You will love this game. It helps you learn a lot about your friends, but like with all other games, moderation is key. Some topics are best avoided to prevent exposure of secrets that might cause harm to a person’s relationship, life, work, health, etc.

In this game, the rules are simple. One player makes a statement about something they may or may not have done. For instance, “never have I ever been to Europe.” Out of the ten fingers everyone has, each player must put one finger down and take a shot if they have been to Europe.

This process continues until there is one individual with all their fingers down, which inherently makes them the winner of the game. Never have I ever.. can be a great ice-breaker for a group of people that are not familiar with one another. It helps to spark conversations and allows people to engage based on their responses.

Blind squirrel is perhaps one of the more sophisticated games you might come across. It takes a little bit of time to familiarize yourself with the game. This game has three requirements: a 54-card deck (52 cards and two jokers), alcohol, and a dealer.

To play, a selected player, known as the dealer, shuffles the deck of cards. They pick a card and put it on the table face up so the other players can see what the card is. The dealer then draws a second card and puts it on the table face down. At this point, all the players are supposed to be gathered around a table so they can have a clear view of the cards. Each player should also be served a cup of alcohol.

The challenge then falls on the player to the dealer’s right, also known as the guesser. The guesser is tasked with guessing the answers to two questions.

If the guesser is unable to guess whether the value of the card is higher or lower than that of the card facing down, they have to drink, even though it is still their turn to play.

If the guesser fails to correctly guess the exact value of the card facing down, they have to take a number of shots equal to the value difference between the cards.

In case of a tie, if the guesser was able to guess that it was a tie, then the other players have to take shots. Otherwise, the player takes a shot alone.

Flip cup is a thrilling drinking game that requires all the players to have alcohol in their beer cups before the game begins. The preferred alcohol of choice is beer. A reasonably sized table is required to play the game. An even number of cups is placed on either side of the table where each of the players on the competing sides can pick and drink.

Whoever completes this challenge first is the winner of the game.

At the end of a tipsy chicken game, you are either a GOAT or a drunk chicken; sounds fun, right?

There are a few requirements for this game; a deck of 100 dare cards, 50 chicken cards, and 50 GOAT cards. The game works in your favor if you are not shy to take on bold dares.

On the other hand, a player who successfully completes a dare is allowed to draw a GOAT card and earn a point. Every win qualifies the winner for a point. The goal is to collect 13 points during the game.

The first player to attain a score of 13 points wins the game, after which the game ends. Players can choose to restart the game by taking all the steps provided all over again.

This game provokes its players to think critically. Each question challenges you to re-think situations or facts you presumed were normal. For instance, would you rather be broke and immortal or mortal and rich? Each situation has its pros and cons.

Would you rather.. can be played by two or more players. The first player can be arbitrarily selected from the group to start. Players can generate their questions or get them from the internet.

People who mention the least popular answer are the losers and need to take shots.

Excessive alcohol consumption is harmful to your health. Please drink with moderation and ensure you have a designated driver to drive you home. All the games listed here are recommended for adults above 21 years (in the US) and 18 years in many other countries.