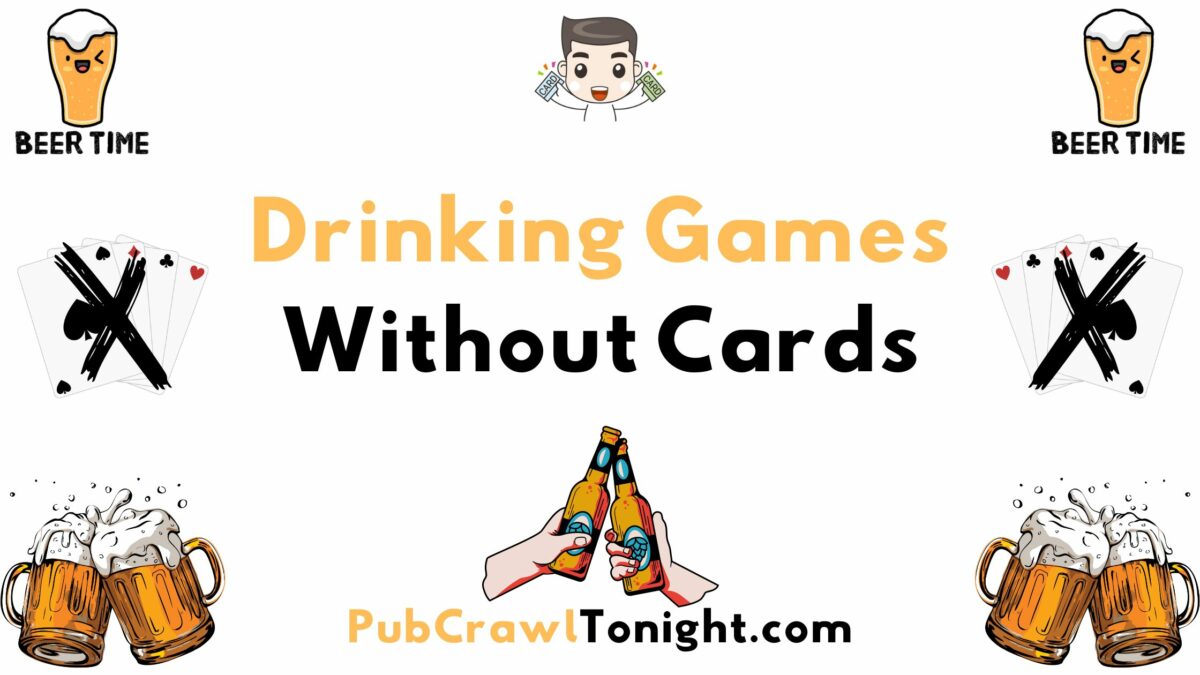 Catching up with friends is always fun. Even more fun is creating new memories that last a lifetime. Memories can be created in many different ways. Still, the best ones involve games that bring people closer by breaking superficial barriers and allowing people to be vulnerable with each other.

Various games can help friends to achieve these goals. Let’s look at ten examples of drinking games that can help groups break the ice and have fun.

Edward Fortyhands derives its name from the popular movie Edward Scissorhands. It is sometimes referred to as Edward Ciderhands or Barrackhands and is suitable for two or more players.

In this game, players duct-tape a pair of 40-ounce bottles of liquor, preferably malt, cider, or wine, to their hands. They are not to remove the bottles until they have consumed all the liquor in both bottles.

People can also play this game with wine, in which case it’s known as Amy Winehands. The name is a reference to the popular British singer Amy Winehouse. Playing the game with wine is also common in the United Kingdom.

The challenge is that a player has to consume approximately 80 ounces of liquor before needing to do something else. They may need to answer the call of nature, pick up a phone call or carry out some other important task.

Players are sometimes allowed to do activities like going to the bathroom if friends assist them. Several friends can play this game. One is disqualified if they vomit during their participation.

This game has appeared on tv shows like How I Met Your Mother, season 7, episode 2.

Beer pong, also known as Beirut, is perhaps one of the most popular drinking games. It is suitable for two or more people or four people in two teams of two players each (or more).

First, ten beer cups are arranged in a triangular shape on both sides of a pong table. All the cups are then half-filled with beer.

Beer pong is common at parties. Because of this, two teams of at least two people are involved. Each team selects a member to throw a pong ball into one of the cups on the other side of the table. If the ball successfully falls into a beer cup, the selected player on the other team must take out the pong ball and drink the beer in that cup.

Beer pong is played until one of the teams runs out of beer cups, resulting in removal from the game. Another team replaces the losers to play against the winning team. Additionally, all the beers are refilled for the winning team, and new ones are provided for the new team.

3. Never Have I Ever

Never have I ever.. is a fairly simple game. It involves two or more people. In a typical setting, each player takes turns saying something they have potentially done in the past.

For instance, the player whose turn it is to speak will say something like, “Never have I ever cheated on a partner.” Anyone in the game who has cheated before should take a shot of the alcoholic drink they are holding.

On the other hand, the player who posed the statement takes a shot if none of the other players has done the activity they presented. After taking a shot, the role passes on to the next player, and the cycle repeats until everyone has had a chance.

No one in the game is allowed to skip.

Never have I ever.. can help break the ice and spark interesting conversations that challenge our assumptions and perceptions of life. A key to keeping this game interesting is ensuring a balance between simple and challenging questions.

Some questions can provoke memories and stories from personal experiences, while others can cause tension, especially for couples participating. However, the bottom line is that it helps people know more about others and share their experiences.

Flip cup is another one of the oldest and most popular drinking games. It can be played by two or more people but is suitable for larger groups at parties.

Typically, 12 players are required to form two teams of six players each. When all the players are selected, each is handed a beer cup. The cup is filled about a third of the way with beer or a drink of your choice.

A large table (like a dining table) is required for this next part. Six players stand on each side of the table, facing each other. They then place their drinks on the table in front of them.

When the game begins, the first player chugs their beer and places the cup on the table. Each cup should hang off the table’s edge a little. The player then attempts to flip the cup and make it land upside down on the table.

If a player successfully topples their cup, the next player on their team is free to chug their beer and attempt to flip their beer cup as well. The game continues until one team is able to turn all their cups upside down first, making them the winners.

A critical requirement of this game is dice. Each player rolls the dice when it’s their turn to play. If an even number is rolled, the player must take a shot of whatever liquor is available. On the contrary, an odd roll requires the player to remove one article of clothing before the game proceeds to the next player.

Some players in the game will roll doubles. Doubles are paired with the following activities.

Before participating in this game, ensure you are comfortable with your body because things can get wild. The only time the game can stop is when one player or the whole team is out of clothes to take off.

Thumper is a game of memory, which makes it easy at first but harder the more people get drunk. A table and a drink for each participant are required to play Thumper.

Each player gathers around the table and must place their hands on it to kick off the game. All the players follow suit when the first player starts thumping on the table with both hands. Each player can play the same or a different beat with their hands.

At one point, the first player lifts their hand and makes their sign, then points at another player. Each player is supposed to memorize that sign for later. The player who is pointed at gestures the sign of the previous player gestures their sign and then points at another player. The pattern repeats until a player messes up by forgetting the sign of the previous player, fails to remember their sign, or takes too long to respond. At this point, they are required to drink their liquor before the game continues.

This game tends to favor those with stronger memory and quick reflexes. They go without drinking longer and stay in the game until most players have been disqualified.

21, also known as 20 plus one, is a fairly simple game. It can involve two or more people. 21 is based on counting from one to 21, and the goal is to avoid being the person that 21 lands on.

It begins by having one person say the number one out loud, the next person says two, and so on. The order is sequential, which means it moves from one person to another in the order they are seated in without skipping anyone unless it’s part of the rules.

The last person that the number 21 lands on must take a shot. In addition, the person who takes the shot gets the privilege of setting a new rule for the game. For instance, they might create a rule that makes the number five illegal. This means that when the game starts again, whoever the number five falls on must skip it and mention six instead.

Anyone who fails to adhere to the rules must take a shot but does not get to create a new rule. After taking a shot, the game restarts from one.

The game gets increasingly complicated over time because it gets harder to keep track of all the rules created as players get drunker.

This game is fun, but it can get you drunk pretty quickly. In this game, everyone picks a word that nobody is allowed to use in the course of the game. The words do not have to be complicated. Any word can be ‘banned’ in this game. For instance, words like what, why, you, me, etc. can be picked.

Anyone who uses a prohibited word must take a shot before carrying on with the game.

Alternatively, a simpler version of this game is where yes and no are banned. It is simpler to set up but much harder to keep up with because most conversations are filled with yes and no responses.

The simple version is also more fun because you can have fun with your friends by tricking them into responding with yes or no to your queries.

This game is most fun when played by three or more people. The rules are fairly simple to comprehend but challenging to implement. It requires quick thinking and a flawless recall of the alphabet.

Players can play rock, paper, and scissors to establish who will go first. Afterward, players decide on the topic the alphabet will cover. For instance, players can decide to provide names of animals for the game, i.e., when it’s your turn to play and your letter is E, you can say elephant.

When it is your turn to play, you have to take a shot if you fail to come up with a name for your letter. The game also restarts from the next person in line when someone takes a shot.

Would you rather.. is a fun game that requires three or more people to enjoy. All you need is a list of questions and drinks for everyone in the game.

A person, picked by the other players based on customized criteria, asks the first question, beginning with, would you rather? The player then provides two options that each player has to choose from. For instance, would you rather be rich and sick or healthy and poor?

If the game has six players and four choose healthy and poor while the other two choose rich and sick, then each of the two has to take a shot of liquor.

While playing these games, please ensure that you have a designated driver who stays sober through all the games and drives you home safely. Do not drink and drive or give alcohol to minors. Additionally, always drive slowly on your way home because speed kills.

Most people playing these games belong to a younger age bracket, meaning they are either students or parents with children who need them for support. Moderation is key when drinking alcohol. Also, drink responsibly to avoid alcohol poisoning.