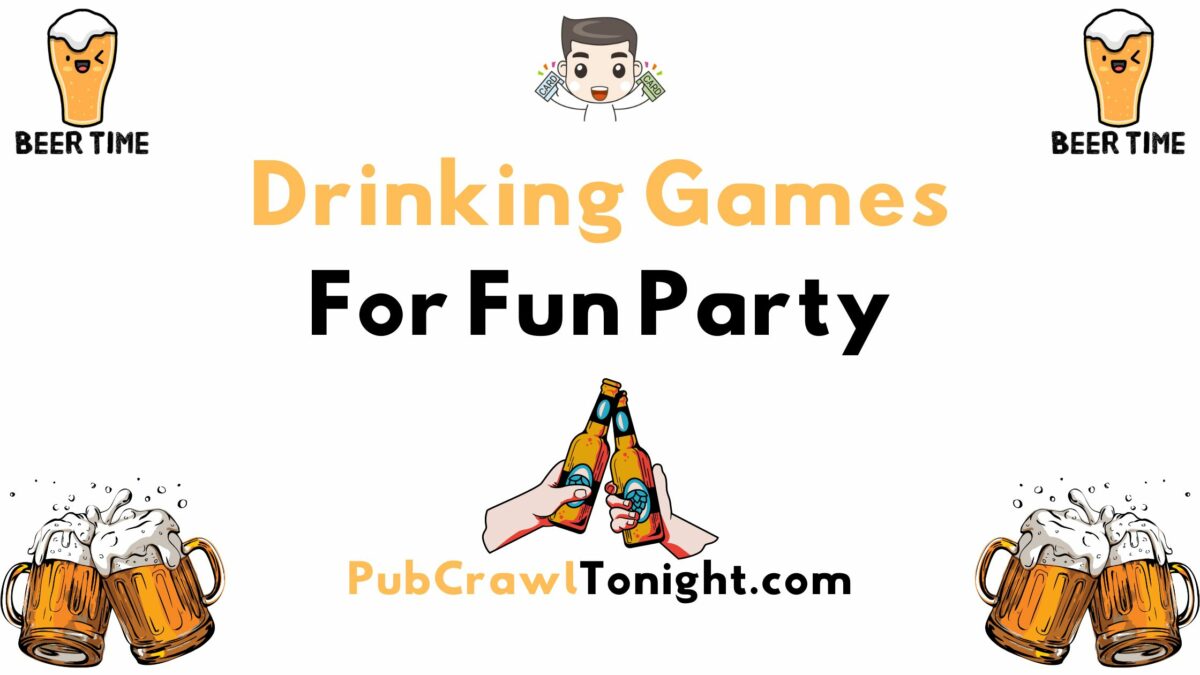 Making party plans should be fun from start to finish, right? At the very least, that is what attendees watch for. The majority of the time, parties provide an excellent diversion from everyday routines, stress relief, and relaxation opportunities.

Typically, parties get everyone in the spirit and off to a wonderful start, but as the event goes on, the host and guests start to run out of amusing things to do to keep the party going and finish it early, or everyone resorts to playing games and messaging on their phones. When they do this, the party’s goal is lowkey not realized because the goal is to have fun throughout. In exactly this way, drinking games come into play.

Drinking games are a collection of diverse games that party hosts arrange to make their gatherings more entertaining. These drinking games enable participants to enjoy their beers or alcohol in a coordinated manner rather than merely drinking and dancing as they incorporate rules of engagement. The majority of drinking games also make sure that players use their brains because, occasionally, quick thinking is required.

The main prerequisites for the games are beer (plenty of it), any alcohol that is widely accepted by the participants, and lots of cups.

The other requirements of the various games may have subtle variations, which will still be described in the individual games.

Below, we’ll walk you through a handful of the games to watch out for at your next party, whether you’re throwing it or attending. Also, anyone wishing to mix up their socializing will find this list to be a wonderful place to start.

You will need: Drinks

It’s very difficult to maintain your composure when you are intoxicated, and this game makes it even harder. The organizers scribble rude or amusing statements on tiny slips of paper that are difficult to read while maintaining a straight face. The aim is not to laugh or react to any of those statements as you read.

Each participant takes a piece of paper and makes an effort to maintain their composure.

Any participant who responds or giggles must drink.

Are You A Match?

This party game is quite ideal for close-knit groups of friends (or close acquaintances).

To play, Take two buddies and have them have a drink while seated side by side.

If their responses match up, they triumph. However, if the replies don’t, then both members of the duo must have a drink, and so it goes on and on.

Tip: Make sure your questions are lighthearted and not very personal; you want everyone to enjoy themselves and leave the party as friends, not enemies.

Another one of our fun drinking games is shown here. Just as the name implies, the players are to assume the posture of a sculpture that is not moving.

Have everyone sip from their drinks a little bit before getting to their feet and remaining still. Your chosen sculptor is the individual who alternates between the players, shifting their postures by moving their arms, legs, or heads.

The idea is to have the players pose while holding something awkwardly.

Everyone who moves, laughs or breaks their stance is removed from the game and given a drink as well.

Whoever is (literally) left standing wins. When that person triumphs, they get to inflict a group penalty on the others, like six push-ups.

After that, the subsequent round starts and it continues that way.

Make sure you arrange six empty cups in a row such that they are all different sizes (e.g., a high ball glass, a tot glass, a tea mug).

Each cup has a number from 1 to 6, which is assigned as it is assigned to every side of a die.

A player then rolls the dice to start the game. They will toss a number that corresponds to a cup.

Once the number appears, the cup with the assigned number that the player’s dice fall on is completely filled with alcohol, and the player is expected to chug it all down at once.

When this is done, he has completed his task and someone else will now roll the dice.

Once the drinking game starts, you can see participants vying to join, hoping they have to earn the tiniest cup.

You will need: drinks

In a circle, the group sits and poses the “most likely” question. Who, for instance, would be most inclined to puke after drinking?

Each individual then points to the person they believe is most likely to do so after the count of three.

The person who receives the most fingers pointed at them consumes the designated amount of alcohol.

This weekend, you should have friends over and try this one out.

Consequently, in this game, the host gets a number of bags to equate with the number of players.

All the bags are to be placed on the floor and all the players will alternately lean and pick them up with just their mouths. Remember, no holding of hands. If you are unable to pick up the bag, you become the defaulter and must chug a glass of booze.

The bag is cut away by an inch with each round that goes by, and this process continues until there is just the bottom of the bag left.

Attached at the Hip

This game is aimed at bringing the participants closer together and is a fantastic icebreaker.

As a result, you draw body parts on sheets of paper and assemble them in a certain place.

The group breaks down into smaller parts, with each person forming a team of two and selecting two chits.

The bodily components listed in the chits must be in contact with one another or remain “connected” for as long as possible. For example, if the team chooses a body part, like legs and hands, they must put their legs and hands together, touching each other as long as stipulated. They are now required to take a shot each time they split.

To get started Get everyone moving and give them a drink to sip before beginning.

The objective of this game is for participants to carry out the exact opposite of the command that has been announced in the room. For example, if a player yells, “Sit on the floor,” all players must either stand on their feet or remain standing if they were already standing; similarly, if you yell, “Jump,” all players must remain motionless.

The individual who obeys the instruction and doesn’t do the contrary takes a drink, and it continues that way.

Beware, this is one of the most severe alcohol games there is.

To play, you deal one card to each player seated in a circle from a pack of cards.

The supplied card must be kept by the player.

The opening player lays their card face down in the middle of the table while introducing each member of the group by name.

The chosen person is then required to drink for the number of seconds indicated on the card. For example, four spades are equal to four seconds.

The Jack, Queen, and King count as 10, but the Ace counts as one, regardless of the card’s suit or color.

The game becomes more difficult when the person called out might lose their turn and transfer their round to someone else, making them an adversary if they have the same number as the card being placed on the table.

Everyone takes a drink for five seconds if the card that is turned over is a Joker.

You will require: Drinks

Everyone involved in this drinking game must pay close attention. If you mess up, you are punished.

Each individual counts out loud, beginning with “1,” then moving on to “2,” and so on. A player must say “buzz” after hitting a number that is divisible by seven. The player drinks if they don’t state “buzz.”

A player also drinks if they accidentally mention “buzz.” The point of the game is to see how high the group can get with the fewest buzzes.

You may play this game with two teams if you like. Make sure that each player has a referee if you play this method, and then remain out of their way.

Game play may be rather competitive, so be careful!

Deal cards from a deck face down, equally distributed among the participants. Turning over a card and putting it into a pile is a turn-based activity.

Players must yell “snap” before anybody else does if the next card to be flipped has the same number as the previous card.

The last person to utter “snap” is the one who drinks.

One of those adult drinking games that call for critical thinking is this one.

A celebrity’s full name is announced to start the game.

The next player will now have 30 seconds to choose a different celebrity using the first letter of the previous player’s last name. For instance, if Justin Bieber was mentioned first, Ben Affleck should be mentioned second.

The game’s orientation is reversed if a player chooses someone whose first and last names both begin with the same letter, such as Julia Jones.

When a player struggles to come up with a name right away, they are forced to start drinking and keep drinking until they do.

Continue to play until the game has three rounds.

Players are under pressure to collect as many names as they can in order to win.

In contrast to the other drinking games for adults listed here, you need to purchase a Jenga set and a temporary marker pen.

Before the games begin, set aside some time to list a separate assignment on each Jenga block. Then, assemble your Jenga tower like you would for a typical game.

Each player takes turns removing a block from the tower while ensuring it does not collapse. Any instructions provided in the Jenga block must be followed by the players, for example.

Everybody drinks, dances, reveals a secret or performs ten sit-ups. Keep in mind that not all tasks must involve alcohol; this is only to provide some randomness.

Make sure everyone likewise empties a small amount of their beverage into the shared pint glass.

The person who knocks the tower over is responsible for finishing the entire drink in the shared pint glass.

This is a short, simple game to play when folks start to nod off.

All you have to do is choose a hand gesture for yourself while seated at a table. You may decide on a victory symbol or just let your creative juices flow (or get nasty).

The game starts with a collective table thud. While the others continue to pound, you start your hand motion and then imitate someone else’s activity.

The individual who performed the hand movement now repeats it and asks for the person he wants to have his turn next.

Anyone who makes a mistake or hesitates too long gets a drink.

You could also make a sound for everyone and play the action and the sound to make the game more entertaining.

We hope you found the perfect drinking game on our list. For more fun drinking games and ideas, look around Pub Crawl Tonight here. As always, have a great night.