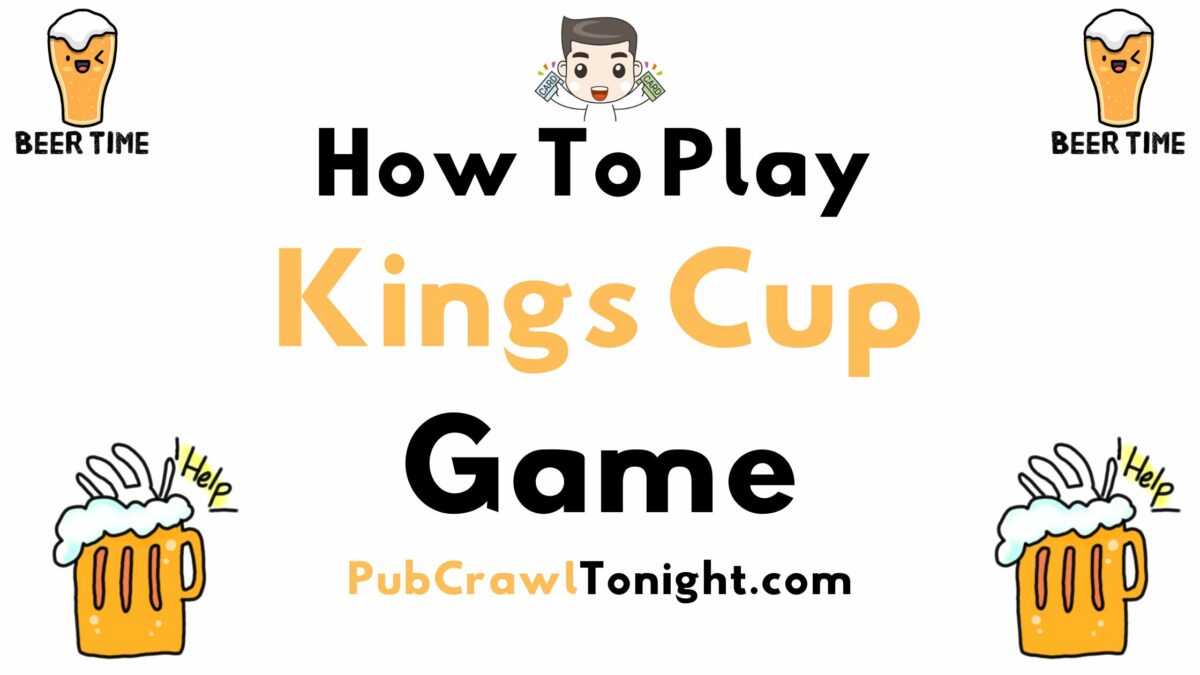 Are you having a get-together with your adult pals when it starts to get monotonous and you want to spice it up? You need not seek any further since the King’s Cup drinking game will take care of things for you.

The King’s Cup is a fantastic game that involves playing with just your best friend or up to ten of your closest buddies. A King’s Cup game can help revitalize stale relationships since it provides the players the opportunity to discuss topics they probably wouldn’t have on a typical day.

King’s Cup is the ideal game since it has simple rules and usually only requires a deck of cards and the drinks you have in hand (beer is normal).

To ensure that you don’t miss out on any of the excitement, keep in mind that each card in this game is connected to an action or mini-game that results in some entertaining competition.

Below, we’ll go through what you’ll need for the game and how to actually play it. There are many different types of beverages, so feel free to choose one that you and your fellow players will like.

However, endeavor to make sure you’re all above the legal drinking age as we don’t support binges and underage drinking. Don’t forget to give this a try on your next house party adventure.

You need to have the essential items to play King’s Cup before you can start drinking. A deck of cards, a large cup ( the King’s Cup) for the middle of the table, and one to two beverages per participant are required.

You may use water or any other beverage of your choosing instead of alcohol, but it does make the activity more enjoyable. If you choose alcohol, however, we advise your drink isn’t too potent because you’ll likely be drinking a lot of it through the game.

Aces are for “waterfalls”:

A player may designate another player who then needs to drink if they draw a 2 (of any color or suit). The selected player is required to consume alcohol for a predetermined amount of time.

If a player gets a 3, they are required to drink.

Everyone at the table must swiftly reach down and touch the floor if a player draws a 4. Whoever touches the ground last drinks.

Five is for the “gents”:

All of the guys at the table are required to drink if a player draws a 5.

Six is for “ladies”:

All the females at the table are required to drink if a player pulls a 6.

Everyone at the table must swiftly raise both hands in the air if a player draws a 7. The one who does so last has to drink.

A player must choose a table mate who must drink whenever they do if they draw an 8, and vice versa. This continues up until a different person draws an 8. Each player must take one additional penalty drink if they neglect to drink while their “partner” is doing so.

Nine is for “rhyme”:

A player who draws a nine must choose and pronounce a word, such as “dog,” aloud. Each player must pronounce a term that rhymes with the original word, such as dug, bug, and so forth, in less than 5 seconds as they go clockwise. This continues around the table until a player is unable to come up with another rhyme. The player drinks.

Ten is for “Never Have I Ever”:

Every player at the table is required to raise three fingers whenever a player draws a 10. The player who drew the card must go first. They must start a phrase with “never have I ever…” and end it with something they have never done. They must drop a finger if other players at the table have already taken that specific action. The discussion is ongoing at the table. Whoever has the first player or players without any fingers left must drink.

If a player pulls a Jack, they can impose a rule that will be obeyed during the whole game. They may decide that no one is permitted to curse, that using the restroom is prohibited, or that no one is allowed to mention anyone’s first name. Anyone who violates the regulation is required to drink a punishment drink.

Queen is for “Question Master”:

Any beverages must be placed in the cup in the middle of the table when a player gets a King. The game is over when a player draws the fourth king, at which point they are required to consume whatever is in the cup. Kings may imply “complete your present drink” if you’re using a can, or you could create a different rule.

You’re prepared for your upcoming gathering now that you’re aware of the King’s Cup regulations! Again, drinking games may be a lot of fun but always drink responsibly and safely. Have fun!