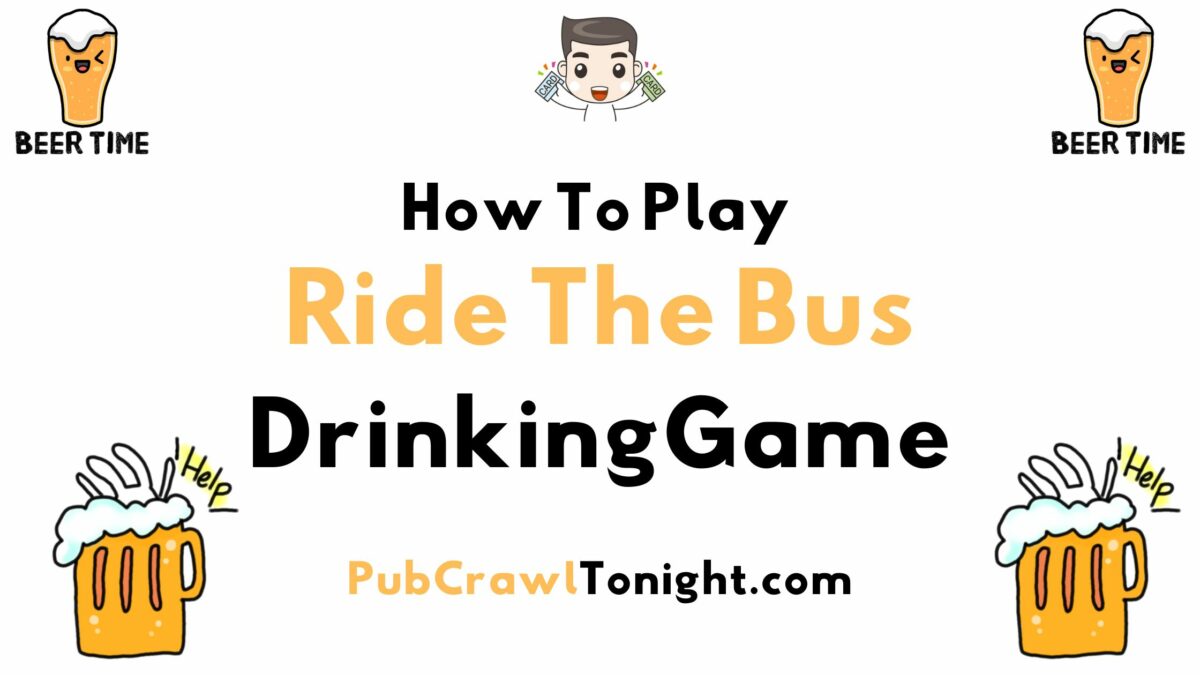 Among the various drinking games available, Ride the Bus is another lovely and thrilling game to amuse yourself at your gathering and strengthen friendships. It requires every participant to be able to blend their thinking skills with a huge part of chance or luck when playing the Ride the Bus Drinking Game in order to avoid becoming completely intoxicated at the end of the game.

Players will require a normal deck of playing cards to participate in the game Ride the Bus. In terms of gameplay and design, the Ride the Bus game is similar to the traditional Kings Cup drinking game. Both are entertaining and ideal for any game night.

The easiest rule to keep in mind is that participants must make accurate guesses or else they’ll have to drink! At the conclusion of the game, the player with the least cards wins!

A little tip: Waterproof cards make playing Ride the Bus much more enjoyable. It ensures there are no more destroyed games.

How is Ride the Bus played? It’s quite simple! Even newcomers may follow along and pick things up as they go. The game only becomes more intense when they become experts after a few games!

Players must determine who will serve as the dealer before the Ride the Bus game can begin. If you are selecting a dealer, be sure that the person is well versed in the game and able to explain and maintain the rules once the game begins.

If you want to add a fun twist, you may choose the dealer by playing a game of chance and drinking, which is completely in keeping with the Ride the Bus concept! Hold a mini-game when participants sip on a beer or other alcoholic beverage simultaneously. The individual who consumes their beverage last is designated as the dealer.

Therefore, make sure you have enough alcoholic beverages ready.

The Rules Of Ride The Bus Drinking Game

The cards will be shuffled at random when a dealer has been selected. Players should gather around a table or on the floor in a circle before the game begins, with their drinks nearby.

One of the face-down cards is exposed in front of each player, and if they correctly predict the color, they can force another player to consume the drink.

The player must drink if their guess is incorrect.

The disclosure of each player’s card concludes the first round.

The procedure is repeated in the second round, during which the dealer poses a new question, “Higher or Lower?” The player must choose if the value of their ensuing cards will be greater or lesser than the worth of their starting cards.

You share a drink if your prediction was accurate. Sip a beverage if your estimate is incorrect. However, if you receive the same card twice, it is a penalty and you must drink. Once every player has seen their second card, the round is over.

A new question: “In between or outside?” is posed by the dealer to the player. You must predict whether the value of your next card will be between the values of your first and second cards or outside of that range.

If you get this correctly, you get to distribute a drink, and if you guess wrong, you must drink. For example, a player’s prediction is right if they receive a 6, 7, 8, 9, 10, J, or Q card when they indicate that their third card is “between” and they have a 5 and a King.

Also, players that have two identical initial cards can declare outside and will win if they don’t receive a third identical card. If their card matches any of their first two cards, they are required to drink immediately.

Round four as well follows suit. Players are tasked by the dealer with predicting the card’s suit, which can be either heart, spade, club, or diamond. The participant that predicts accurately will distribute five drinks, and if the guess is wrong, they must consume the alcohol. Each player receives a new card, just like in the prior three rounds.

Building up the Pyramid:

The game moves on to the pyramid phase after each player has gathered four cards. Although we’ve provided some options below, feel free to change them if you have other ideas.

The dealer deals five cards face down, followed by four, then three, then two, and finally one card at the top of the pyramid. A specific rule has been set for each row. The base five pyramid cards can be designated as Row 1, and the next four cards as Row 2, etc. If they predict incorrectly, they must consume the beverage.

The remaining cards are tallied once the last card of the pyramid has been exposed and every other card has been thrown away. You will learn here how the drinking game Ride the Bus earned its name.

The losing player must “ride the bus” since they have the most cards. The player with the highest card loses if there are two players with the same number of cards.

The losing player, who “Rides the Bus,” now has to successfully respond to the next four questions in succession. Black or red? Higher or lower? Outside or in between? Guess the suit. The next question is posed if the player makes a good estimate. They must drink and start over with the first question if they make a wrong estimate.

When a player properly answers all four questions in a succession correctly, the game is over, or when all of the cards have been dealt. Additionally, if the player is totally drunk, the game stops!

Lastly, nobody wants to continuously “ride the bus.” The final participant should make every effort to “get off the bus” as soon as possible to prevent being totally drunk.